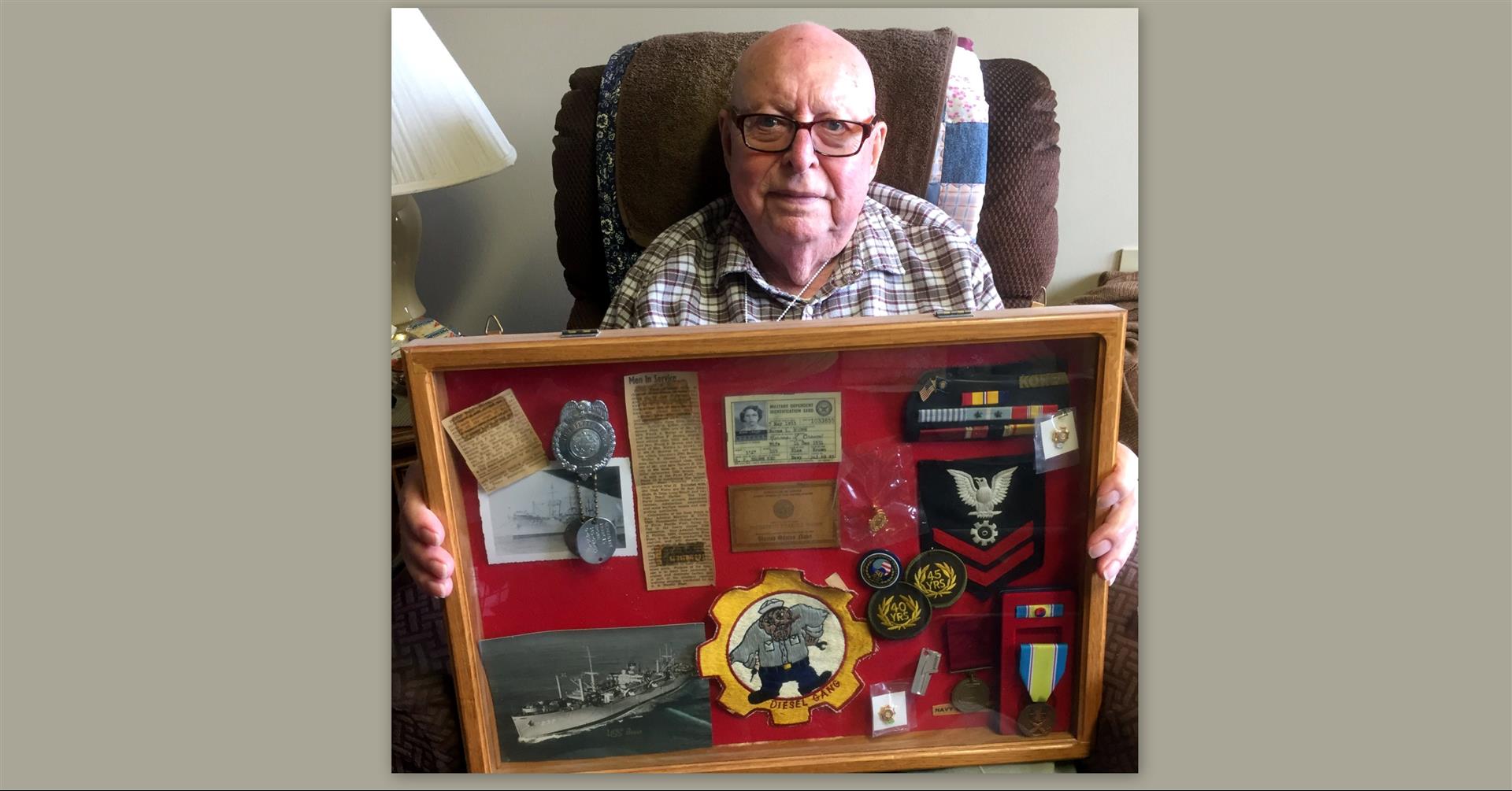 Resident Bernard Brown was an engineer in the Navy from 1951 to 1955. “It was either be enlisted or drafted, so I enlisted,” said Bernard.

In order to prepare for his service, Bernard went to San Diego to go to school to get his rating and do the training he’d need for his work on a large ship.

“I also went to fireman school and swimming school – you had to be prepared for everything. And you better learn how to swim!” said Bernard.

It was a skill he had to put to the test.

“We got dumped into the ocean one time, our boat capsized. We were in there at 2:30 a.m. on February 14. It wasn’t too bad as long as you were in the water, but once they got you up out of the water, you about froze,” said Bernard.

Bernard was on a ship with a little over 600 people. There were 30 individuals in his division. He was part of the crew that took care of the two landing crafts that were attached to the ship. Those boats were what they used to go in and land on the beach to let off men or whatever they needed to drop off. In one case, that was thousands of people!

“In February of 1955, we had to go off the coast of China and evacuate a bunch of Chinese people and take them to what is now Taiwan. We transported 7,000 people in two trips—3,000 the first trip and 4,000 the second trip. The capacity for our boat was 2,600 and we were packed in there like sardines. After we unloaded all of them, we had to go to the Philippines to have the ship fumigated. It smelled something terrible. After we were done, we got to go to Hong Kong for some R&R. Like any sailor, you go out and have a beer. We only stayed there three or four days and then headed back to the Philippines with a bunch of civilians on the ship, taking them over. Then we got hit by a typhoon! For two days we didn’t do anything but try and stay in our bunk. The ship would rock and roll too much,” said Bernard.

To help memorialize his days in the service, Bernard has a special shadow box with some of his keepsakes from the Navy.

“These are some of the memorabilia I had left. I framed them and display them. I have my rating, two medals—the Korean Medal and the Medal of Honor—and campaign ribbons from different countries where I was. Japan, China, Korea, Philippines and points in between,” said Bernard.

During his years of service, Bernard married Norma in 1952 and she moved to San Diego from Kansas.

“That was quite the experience for her because she had never been out of the state of Kansas,” said Bernard.

After he was discharged in 1955, the couple came back to Kansas. Bernard went to college and got his master’s degree in industrial arts with a minor in school administration. Over the span of his career, he taught industrial arts, math and driver’s education in Weskan, Kan., he was the director of facilities at St. Mary of the Plains College in Dodge City, he taught in Deerfield, Kan., and he took on odd jobs.

One of those moves includes the couple’s move to Manor of the Plains last June.

Thank you, Bernard, and all our veterans, for serving our country!

Posted on
April 15, 2020
by
Cindy PMMA
filled under
Residents
Veterans
« Back to Blog