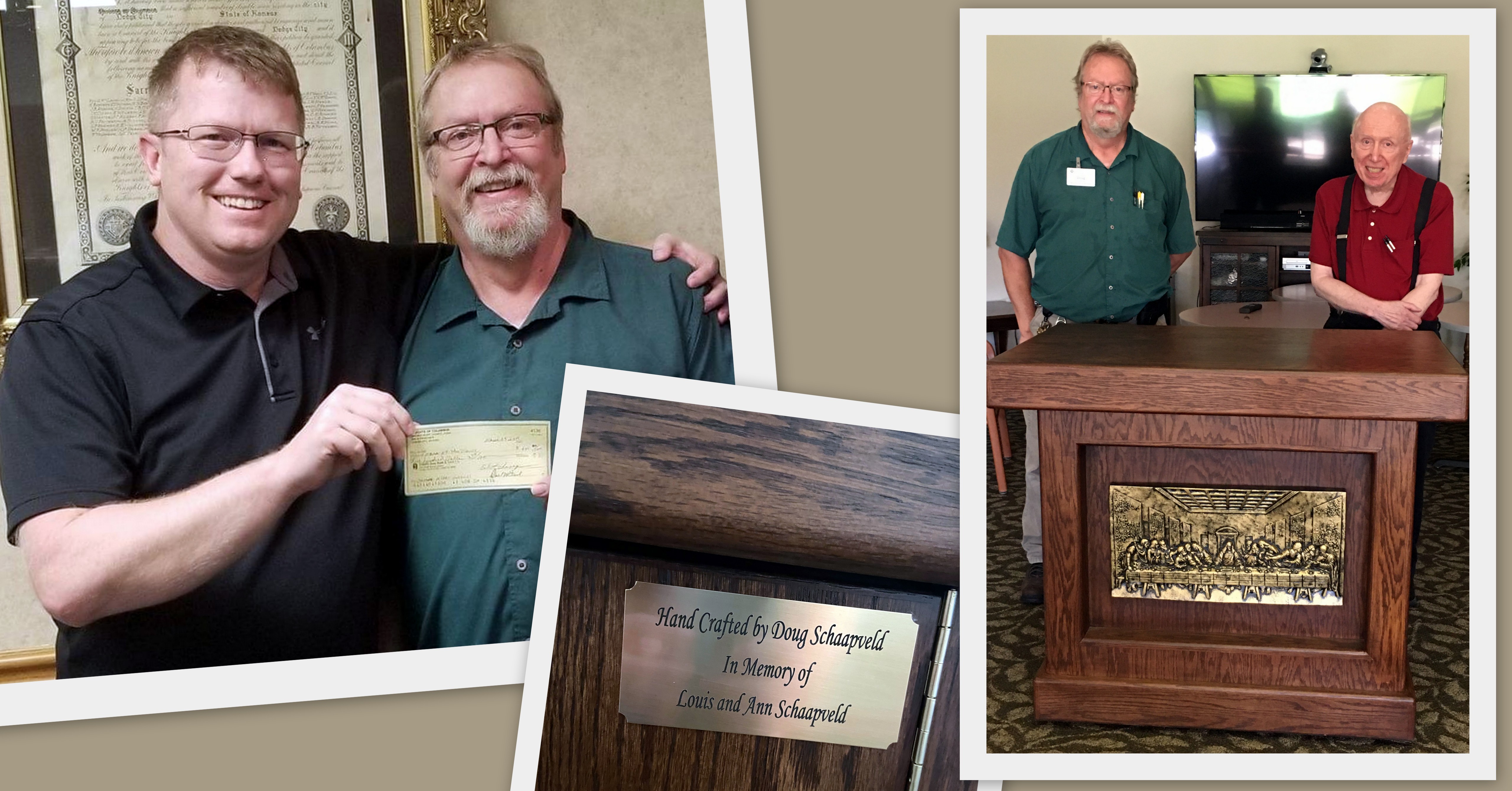 For years, whenever residents would gather together to hold mass, a makeshift altar would be set up on a table at the front of the room. It worked fine, but those in the congregation dreamed of the day they would have something just a little nicer and more permanent. The problem was that whenever they found something they liked; it came at a price they simply couldn’t afford.

As the community’s environmental services technician, Doug had a reputation for building things—and those in the congregation thought that maybe he could make an even nicer, completely custom altar for a fraction of the price.

“I’ve always been working on something, so when they approached me about it, I thought sure, that’s nothing,” said Doug.

Prior to joining the staff at the Manor of the Plains, Doug spent 25 years working in a cabinet shop and has been creating pieces in his free time ever since.

“I’ve been in woodworking forever—I have sawdust in my blood,” said Doug.

To get started, Doug met with Monsignor Brian Moore to determine what was needed and get some basic measurements. From there, he drew up the initial plans and determined what the materials would cost.

Knowing that money was tight, Doug then approached the Knights of Columbus, where he’s a member, to see if they might be able to chip in and offset the cost.

“I showed them the plans and said I wanted something nicer for the priest and they ended up donating more than I asked for. The Grand Knight even donated another hundred for the book they read out.”

When it came time to actually get the altar built, the coronavirus lockdown turned out to be a blessing in disguise for Doug.

“Because of COVID-19, I was able to get the altar done in just two to three months because I wasn’t going anywhere or doing anything,” said Doug.

Now complete, Doug has dedicated his work on the altar to the memory of his parents, who were former Manor of the Plains residents and also sees the piece as a part of his own legacy at the community.

“Knowing I only have a year and a half before I retire, I can look around here and see all kinds of stuff I’ve fixed and built and made, but it is nice knowing that this is something that will be here awhile,” said Doug.

In addition to the $600 initial donation from the Knights of Columbus, Dan Boatright and his family donated $1,000 in memory of his mother Eleanor Boatright. And, beyond the cash donations, independent living resident Rolland Werner donated altar cloths and past residents Lawrence and Betty Herrmann donated a crucifix and candle holders.

Posted on
August 25, 2020
by
filled under
Employees
Giving
« Back to Blog