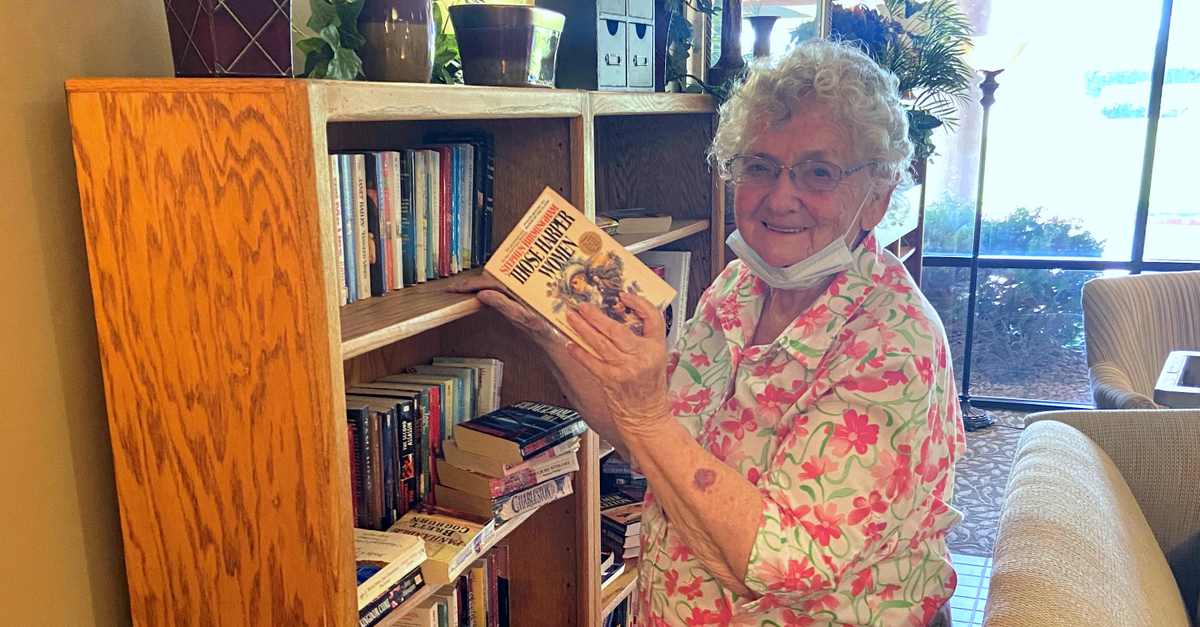 Moving into a new home in the midst of a global pandemic isn’t exactly an ideal situation, but for Maureen Schlereth and her cat, Dickens, the good has outweighed the bad.

Maureen and Dickens moved into Independent Living back on Aug. 1. However, due to COVID-19, they had to spend their first two weeks in quarantine. It was a situation that most people would find frustrating and maybe even a bit depressing, but for Maureen, it provided an opportunity to gain a new perspective on life.

“We’ve been through things like this before and we’ve made it,” said Maureen. “We may not like it, but when we get through, we appreciate being free again—you’ve gotta have the bad sometimes to appreciate the good.”

Unable to explore the community’s interior during quarantine, Maureen spent her time getting to know the people and the surroundings just outside her back door.

“I spent a lot of time on my patio, watching the neighborhood walkers go by and visiting with them,” said Maureen.

And she wasn’t the only one. Dickens also enjoyed having his own fenced in area where he could go out, explore and watch the resident birds and squirrels. In fact, it was that innate desire to explore that initially brought Dickens and Maureen together.

“When he was a kitten, I found him on my doorstep one day. He was covered in sand burs and couldn’t even lay down so I cleaned him up, took him in and he repaid me by being a little Dickens,” said Maureen.

Before Dickens, Maureen was married twice and had four children. She received her LPN from Dodge City Community College and worked as a nurse at two nursing homes and as a receptionist at Dodge City Medical Center. In retirement, Maureen has enjoyed spending time with children, 12 grandchildren and 13 great-grandchildren. Maureen is also an avid reader, preferring “girl stories” with a little romance (but nothing “too graphic.”) It’s that love of reading that has led Maureen to volunteer in the community library where she organizes the selection and adds new arrivals.

There are immediate openings in independent living. If you’d like to learn more about how to make Manor of the Plains your new home, too, contact Brittany Gladbach, marketing director.

Posted on
October 19, 2020
by
filled under
Residents
« Back to Blog