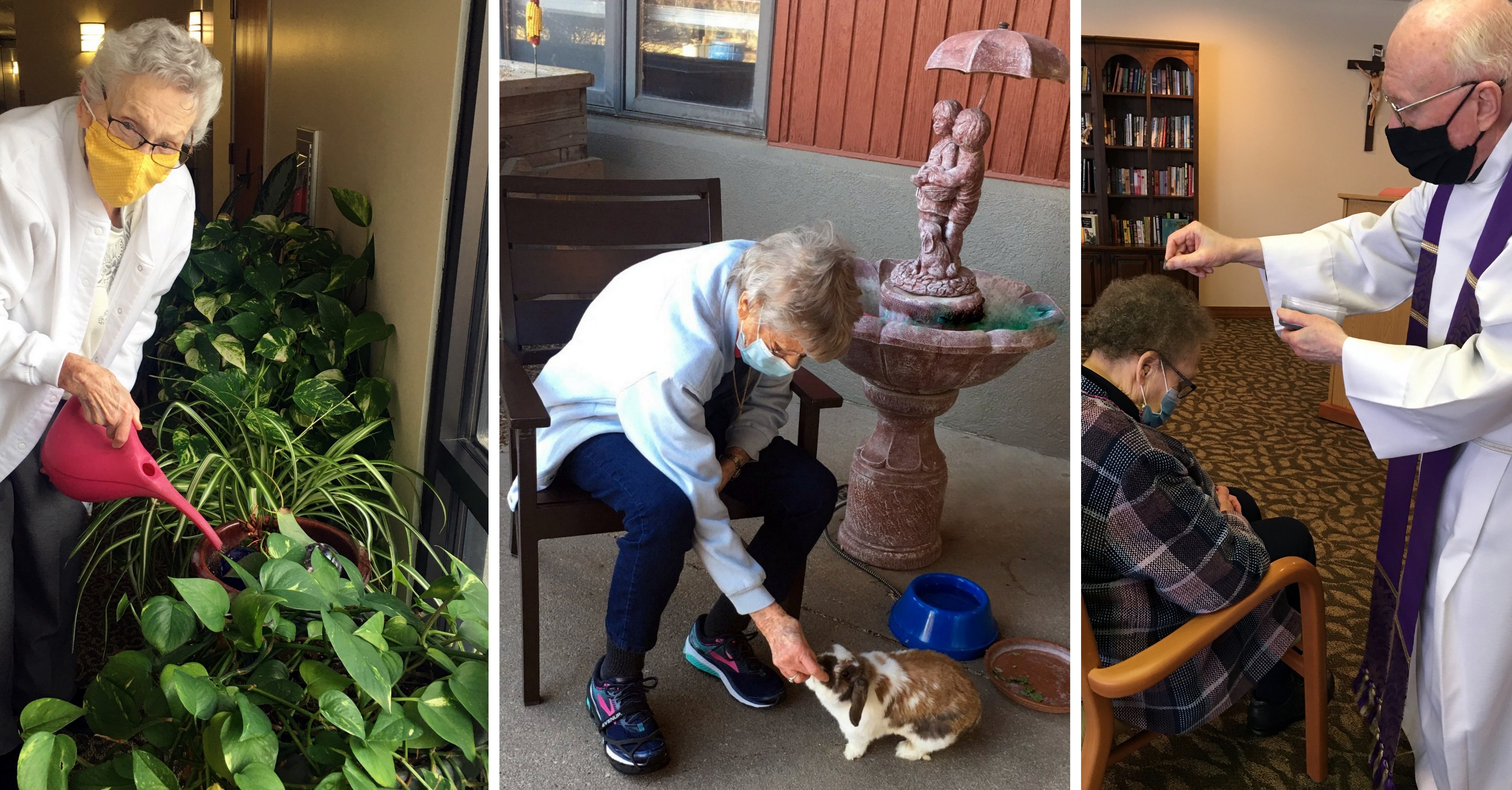 Giving thanks to those who give back

April is volunteer appreciation month and to show our gratitude to those who help make Manor of the Plains such a great place to live, we’re spotlighting just a few of the residents who so graciously share their time and talents with others.

About a year ago, Bobbie McNair was volunteered to become, “bunny caretaker,” a job that requires her to feed and socialize with the bunny who has lived in the enclosed courtyard for the past several years.

With what Bobbie calls a three-story house and plenty of carrots, apples and some nice green lettuce provided by the community’s kitchen, the bunny has everything it needs—except one thing—a name.

Regardless of his (or her) name, Bobbie does her best to make sure the bunny is always well taken care of because as she puts it, “I’ve been a sucker to like animals all my life.”

Like Bobbie, Maxine Sexton stumbled into her volunteer job almost by accident.

Disappointed that the regular bingo caller was away one Saturday, Maxine commented to Activity Director Clara Contreras that she wished she could call bingo, to which Clara replied, “why can’t you?”

And the rest is history. Maxine now trades off with the community’s other bingo caller every Saturday.

Besides loving the game, Maxine has other—more altruistic—reasons for volunteering.

“It’s important to me to give my time and help other residents have a good time,” said Maxine.

Donna Imel and Donna Penner (or “the Donnas” as they are known around the community) have been helping take the temperatures of residents since early on in the pandemic.

The two friends set up during each lunch service on the weekends and the noon service on the weekdays where they keep a log of everyone’s temperature who enters the dining room. It’s a job that both Donnas enjoy while providing them with a little extra incentive.

“I like to volunteer because it gets me out of the apartment seeing people and talking to them,” said Donna Penner.

For Donna Imel, the work is just an extenuation of what she’s been doing for more than 20 years.

“It’s just something I’ve always done,” said Donna Imel. “When I retired in ‘97 I just said, ‘you’re going to volunteer.’”

Since arriving in 2018, Monsignor Brian Moore has held mass for residents in Independent Living and communion service for those in Health Care and Assisted Living. The opportunity to continue to lead his fellow Christians in worship is something that Monsignor Moore is thankful for while confirming his appreciation for the place he calls home.

“I’m very grateful for the opportunity to give that service to the people who come,” said Monsignor Moore. “It reflects the Presbyterian Manor’s Christian heritage, which I’m always glad to reinforce.”

For more than a year, Shirley Ballard has been preparing the lunch and dinner menus for every resident in the community. Starting with a stack of papers hot off the copier, Shirley cuts each one then sorts them based on where an individual lives—a process that requires quite a bit of brainpower.

“I had to memorize all these people’s names and where they lived,” said Shirley. “It keeps me busy and takes a while to do, but I like it because the more I do, the more alert I stay.”

Before taking on her current duties, Shirley helped out in the kitchen and called bingo among various other jobs.

“I try to keep busy,” said Shirley. “The more you do the more you’re able to do.”

Alverna Cantrell possesses one of the community’s greenest thumbs – she worked in the flower business for 35 years and even had her own shop. So, the moment she became a resident, she also became the community’s de facto plant caretaker.

Among her duties, Alverna waters all of the plants in D hall and, when the weather allows, plants and maintains everything in the community’s courtyard.

Beyond seeing the fruits of her labor, Alverna also enjoys the opportunity that working in the courtyard and tending to the community’s plants provides her to lend others a hand.

“It’s just important to me to help people,” said Alverna.

Posted on
March 26, 2021
by
filled under
Residents
Volunteers
« Back to Blog